A downloadable game for Windows, macOS, and Linux

Bad robot is a re-imaging of the game Berzerk released in 1980 by Stern Electronics, specifically the Atari 2600 version.  Bad robot feature additional game-play elements and several changes over Berzerk to keep things interesting.  Primarily the game is a never ending score attack game where you try to stay alive for as long as you can while scoring points to dominate the leader boards.

MegaTechCorp (MTC) is a world leader in artificial intelligence, with a focus on military applications it researches and develops the latest in autonomous war robots.  It’s newest hi-tech development code-named ‘bad robot’ is about to launch.

At 11 minutes past midnight ‘bad robot’ came online with disastrous results.  The robots quickly began ignoring their core programming and went on a rampage killing  all personnel insight.  They’re bound to move on the city soon, can anyone  stop them?

As the last living person still in the facility it’s up to you to thin their numbers, with the help of an experimental disc weapon you head out.

Move around with the cursor keys, WASD or controller, press SPACE or the fire button while moving to shoot your disc in that direction.  The disc will bounce around the room destroying any bad robots it hits, be aware the disc will lose it’s power after 4 bounces.  You must collect your disc before you can fire it again.

While moving do not touch any of the walls as they are electrified, touching a bad robot is also not advised.

If you spend too long in a room ‘evil motto’ will chase you down, your only salvation is to leave the room - quickly.

Occasionally a shield will be available, collect this to absorb one bad robot plasma hit, you can only hold one shield at a time. 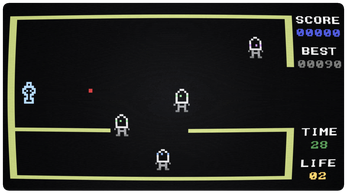 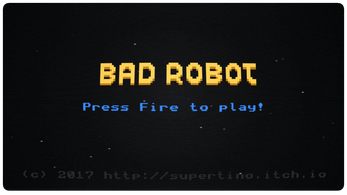 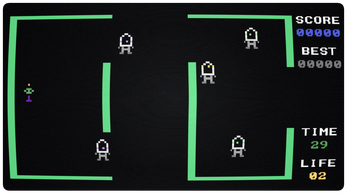 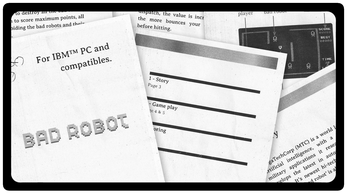 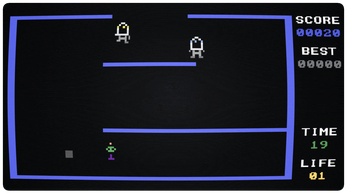 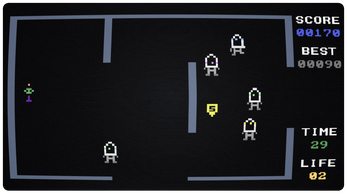